Chelsea Morton, a graduate student from Southern Illinois University Carbondale, releases a sloth named Choco. Morton is spending a year in Central America studying how well the species actually adapts and survives once they are moved to new locales.

CARBONDALE, Ill. — Many animals rely on quickness or flashy, top-end speed to stay out of a predator’s way or to avoid encountering humans encroaching on their territory. But for one animal in particular – the aptly named sloth – a hasty retreat is not an option.

As one of the slowest mammals on Earth, sloths are one of the most commonly rescued species throughout Latin America. Their notoriously slow gait makes them extremely vulnerable to human impacts.

But what happens to sloths after they are relocated? Does simply moving them out of the path of development save them or simply delay their demise?

A graduate student from Southern Illinois University Carbondale is spending a year in Central America studying how well the species adapts and survives once they are moved to new locales where they can live their “lazy” days out in peace.

Chelsea Morton, a graduate research assistant with SIU’s forestry program and Cooperative Wildlife Research Laboratory, is based in the small town of Gamboa, located in the province of Colon in Panama. Located in the buffer zone near the Panama Canal, its forests form part of the Soberania National Park, renowned for its diverse wildlife in one of the world’s most zoologically fascinating areas.

“Sloths are extremely fascinating animals” Morton said. “Their evolutionary biology is so unique, allowing them to sleep, eat, and even give birth upside down, at unimaginable heights in the forest canopy. But they are also so fragile, both in captivity and when it comes to habitat loss.”

Before beginning her research, Morton did rescue and rehabilitation of sloths in Panama.

“I discovered they had personalities, preferences in food, individual habits, and so many characteristics you only witness through long periods of direct observation and admiration,” she said. “Now, researching them in the wild has allowed me to see the same species I cared for in captivity, in an entirely different construct. They are very intelligent and unpredictable, which makes the field work all the better.”

Morton’s research focuses on understanding how sloths rescued from the wild as orphans and rehabilitated in captivity adapt following their release back into the wild. Finding out what types of habitat they select, and how those compare to habitat selected by wild sloths, are key aspects of the work, as well as studying their behavior in the wild, the distances they travel to establish their home range and ultimately, their survival rates.

“To my knowledge, there are no studies to date that have published results on the post-release success of rescued sloths that have been hand-reared in captivity, which is why this project is so fundamental,” Morton said, meaning the data can be essential to improving current husbandry techniques.

“The goal is to develop an understanding of the success rate of releasing rehabilitated sloths so that these individuals may contribute to wild populations throughout Latin America by increasing genetic diversity and population abundance.”

“He has guided me and continues to do so even being in different countries,” Morton said. “His attentiveness and experience truly form a crucial part of this project.”

“It provides insight into the efficacy of sloth relocation programs,” Nielsen said. “Such programs are popular in Central America, but have received little research attention.”

A veteran of dozens of such wildlife investigations, Nielsen said his research at SIU has contributed to global wildlife conservation, with study findings used to inform conservation decisions regarding wildlife habitat and populations on multiple continents.

Morton said SIU in particular has played an important role in her development as a researcher.

“SIU has given me the resources and tools necessary to develop a project that I always have been so passionate about. The forestry program has been very supportive of my endeavors abroad and assisting me as a graduate student.”

Andrew Carver, executive director of international affairs at SIU, said he is proud to have helped recruit Morton to SIU while conducting research himself in Panama. Carver said former SIU student and LASPAU Fulbright grantee Nestor Correa, along with his partner, Yiscel Yangues, are co-directors of the Panamerican Conservation Association, a non-governmental organization which is leading Panama’s sloth conservation efforts. The organization has a long tradition of collaboration with SIU, and has facilitated research for several SIU faculty and graduate students.

Morton said she enjoys working with Correa and Yangues.

“They took me in as a volunteer three years ago and have become my personal and professional support system here in Panama for the project,” Morton said. “They have more than 15 years rescuing and rehabilitating sloths, and I will always admire them for the marvelous work they do.”

Working in the field

Before their release into the wild, the captured or rescued sloths are placed into an enclosure within a wild environment. This “soft release” technique allows the animal to acclimate to a wild area while minimizing risks. While in that environment each animal is fitted with a VHF tracking device, allowing Morton to track them once they are fully released.

Five or six days a week, Morton finds each sloth using radio telemetry equipment. Once she finds them, she takes down information on the characteristics of the tree that the sloth is using, its behavior and how far it’s traveled from the previous location.

“Researching them in the wild has allowed me to see the same species I cared for in captivity, in an entirely different construct,” she said. “They are very intelligent and unpredictable, which makes the field work all the better.”

At SIU, promoting student research, even at the undergraduate level, is a top priority. As a graduate student who is entertaining the idea of pursuing a doctoral degree in the future, Morton said the research experience has been invaluable.

“It’s taught me the art of self-discipline and self-diligence,” she said. “As a researcher, problem-solving has been the main attribute I have been able to improve. This project continues to remind me how much I admire the tropics and wildlife conservation, and how rewarding it is to research a species that I have personally worked with for over three years.”

A fondness for wildlife

Morton said she takes pleasure in finding was to protect wildlife, which she considers innocent and vulnerable in a world where humans can make it difficult for animals to live.

“I grew up developing a passion for endangered species or animals that were heavily affected by deforestation, poaching and other anthropogenic disturbances,” Morton said. “So I guess realizing how susceptible wildlife are to things they can't control has made me love and appreciate wildlife even the more. I love my project because it involves sloths, a species that is very sensitive to human activity, and finding ways to rescue and give them a second chance at survival.” 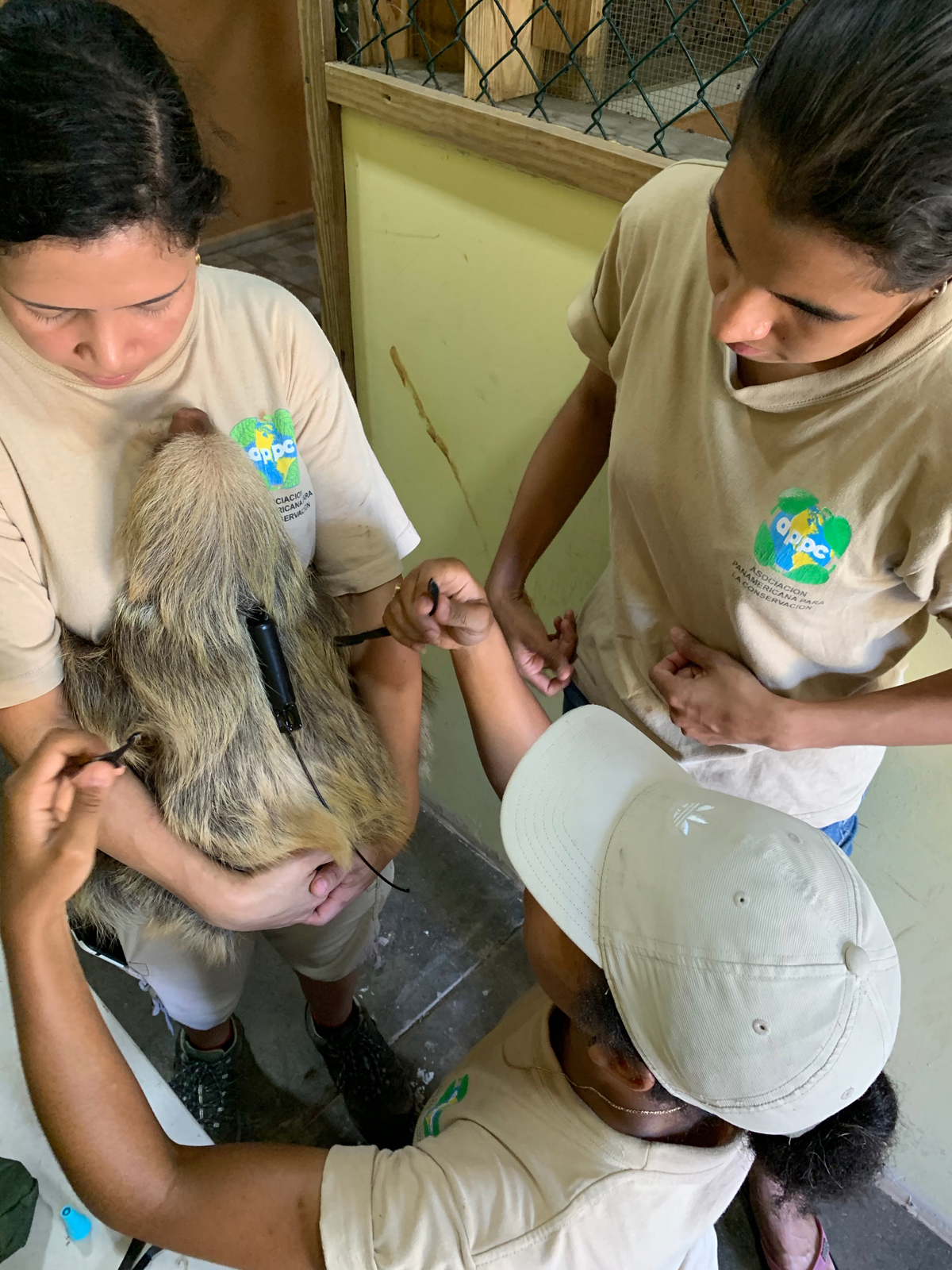 Chelsea Morton (wearing hat), works with a team to fit a radio transmitter on a sloth they are preparing to release in this March 22, 2020 photo. Morton is working in the small town of Gamboa, located in the province of Colon in Panama. (Photo provided)

Don't Take Our Word For it! Here's What Our Customers Think:

What better way to support our furry friends then buying an awesome sloth gift, it felt good helping the conservation of sloths :)

I love this funky website, I come here to get all my sloth gifts for family and friends

Checkout
Free shipping when you spend over $99
Someone purchased a

'I can do slower' Sloth Luggage / Suitcase Cover

2 minutes ago from Berlin, Germany
Someone purchased a

3 minutes ago from Amsterdam, Netherlands
Someone purchased a

13 minutes ago from Amsterdam, Netherlands
Someone purchased a

18 minutes ago from Moscow, Russian
Someone purchased a

A Face of Lazy Purse / Wallet

17 minutes ago from London, Great Britain
Someone purchased a

4 minutes ago from Berlin, Germany
Someone purchased a

12 minutes ago from Berlin, Germany
Someone purchased a

13 minutes ago from Berlin, Germany
Someone purchased a

14 minutes ago from New York, USA
Someone purchased a

18 minutes ago from Rome, Italy
Someone purchased a

15 minutes ago from Amsterdam, Netherlands
Someone purchased a

14 minutes ago from Berlin, Germany
Someone purchased a

11 minutes ago from Rome, Italy
Someone purchased a

6 minutes ago from Rome, Italy
Someone purchased a

11 minutes ago from London, Great Britain
Someone purchased a

All The Best Cropped Pullover

6 minutes ago from Moscow, Russian
Someone purchased a

7 minutes ago from New York, USA
Someone purchased a

17 minutes ago from Amsterdam, Netherlands
Someone purchased a

4 minutes ago from Amsterdam, Netherlands
Someone purchased a